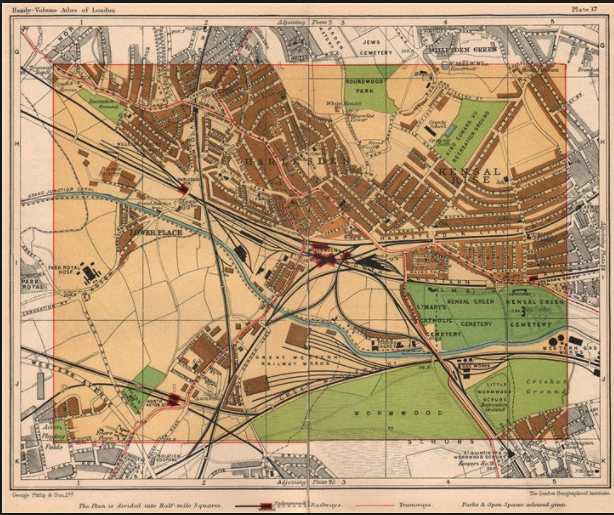 The next sensory workshop take place on Saturday 18th March, 2017, (11.30 am – till 3.30 pm), Dissenters Gallery, North West London and will have a focus on geology of Kensal Green Cemetery, with guest presenters Diana Clements, and “terroir” with Dany Teixeira and Vaughn Tan (and include winetasting).

The workshops are a space to explore and experiment, as well as leading up to a multi-sensory performance on 21st May, called Journey to the Interior, inspired by Jules Verne and George Bellas Greenough, a founder of Geological Society London.

Beneath your feet: a geology workshop based on Kensal Green and the wider London area

Have you ever wondered what lies beneath your feet? In an urban area it is not something we think of very often. A cemetery is a good place to start looking as grave diggers allow us a glimpse. For the workshop the geology beneath Kensal Green and the wider London area will be explained and examples of the rocks and fossils found will be passed round for discussion. We will consider the environments relating to the various rock-types going back over the past 100 million years and can look into the future of where Britain may be 100 million years hence.

Diana became interested in the geology of London when researching her own area, Islington, and she went on to mount an exhibition in the Islington Museum. More recently she compiled a Guide to the Geology of London for the Geologiststs’ Association and now works with the London Geodiversity Partnership to identify, conserve and interpret London’s geology.

Wine tasting and discussion of the concept of terroir.

“In the act of tasting, when the bite or sip moves through the mouth and into the body, culture and  nature become one…The concise Oxford dictionary defines terroir as soil, ground, locality, place or part of the country. A contemporary French dictionary says terroir is either when something has a particular flavour that can be attributed to the soil, or the typical tastes and habits that come from a region or a rural area.In France terroir is often associated with racines, or roots, a person’s history with a certain place. This connection is considered essential, as timeless as the earth itself.” From Place Matters, by Amy B. Trubek

There is a £5 contribution towards the space hire and wine.

View all posts by Tereza Stehlikova